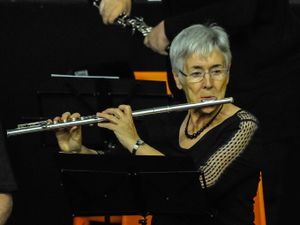 Flautist Anne White (pictured), the driving force behind the creation of the Portsmouth Philharmonic, has stepped down as Chair of the orchestra after nine years in the role.

Her replacement as Chair is Di Lloyd, a ‘cellist, who joined the orchestra in 2014.

Since 2009 the orchestra has gone from strength to strength, raising more than £15,000 for local charities and providing musicians in Portsmouth with the chance to perform orchestral pieces in venues across the city and beyond.

Anne said: “I am absolutely thrilled by the way the orchestra has expanded over the years. It has been a  source of happiness and friendship for so many people as well as raising money for good causes.”

However the orchestra very nearly failed to get off the ground at all.

“After an initial attempt failed in 2008, despite more than 40 people tuning up for the first rehearsal, eventually four plucky musicians met in the 5th Hants Volunteer Arms in March 2009,” recalled Anne.

“One of the number said it would be too difficult to set up an amateur orchestra and was not seen again! Another said he would conduct as long as all he had to do was 'wave the baton', so he was given the role of conductor and the orchestra was born.

“It was agreed that given the population of Portsmouth there should be sufficient numbers of enthusiastic amateurs to join in.

“The aim was to be inclusive which meant no auditions or trial periods, enabling local amateur musicians the opportunity to play great music together and to have three concerts per year, the proceeds of which would be donated to charities.

“I remember our first concert took place in St Swithun's church; the tickets cost £2 and £140 was sent to the Rowans Hospice, the orchestra's charity of choice that time. Refreshments were served by members of the Havant Symphony Orchestra who were happy to support their amateur colleagues,” she said.

Anne will also continue to play her flute for the ensemble. “I cannot imagine ever not wanting to head off and practise each week. I was only talking to one of our ‘cellists recently who remarked it really is the best way to start the week.

“However, I felt the time was right to pass the responsibility for driving the orchestra forward to someone else and I’m delighted Di has agreed to take on the role. I am sure she will do a great job.”